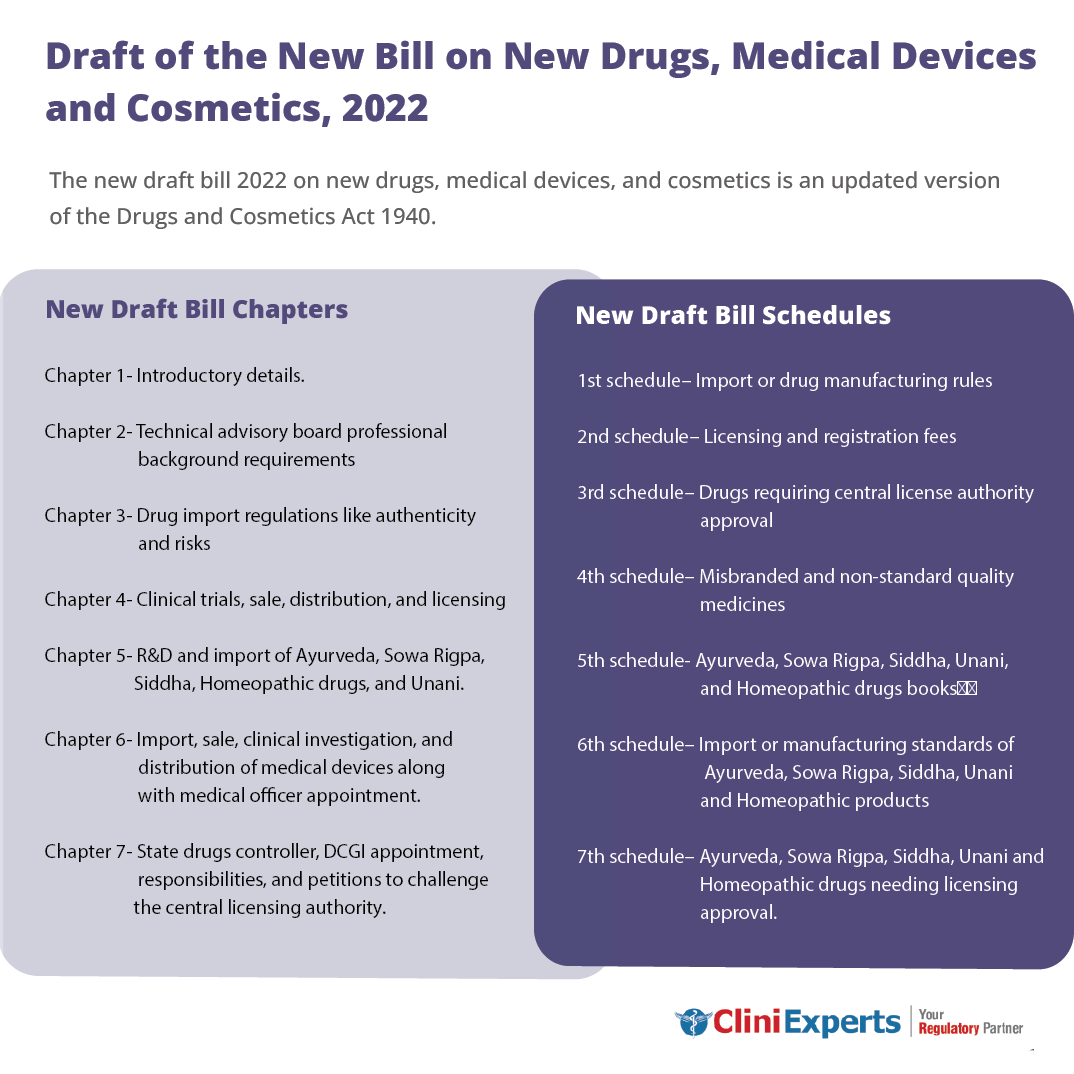 Chapter II of the draft contains information on the provisions made by the ministry to form a “medical devices technical advisory board.”

Chapter III of the draft includes information on the Import of Drugs and Cosmetics only in the public’s interest if the drug is being used in case of an emergency such as an epidemic or any natural disaster. If the drugs are found too risky for living beings or do not have any medical value as it claims, they can be prohibited.

Chapter IV of the draft includes the expansion of clinical trials of drugs and manufacture, sales, and distribution of Drugs and Cosmetics.

Chapter V of this bill includes Ayurveda, Siddha, Sowa Rigpa, Unani and Homeopathic Drugs under AYUSH, while chapter IV of the 1940 act covered these parts.

Chapter VI includes medical devices and their import, sale, distribution, and clinical investigation, which were taken care of earlier by medical device regulation 2017.

Chapter VII is called miscellaneous, which deals with parts like DGCIDCGI appointment, allocating their duties, state drugs controller, and petitions under which any person has the right to approach central government against the decisions of the central licensing authority.

The draft also deals with the issue of online pharmacies, called e – pharmacies. It is stated that the union government is working on rules and regulations so that government can regulate the online sale of drugs and medical devices.

First, schedules consist of standards that must comply with for importing or manufacturing drugs for sale and distribution.

The second schedule consists of fees that need to be paid for the license, registration, certificate permission, and approval.

The third schedule consists of a list of drugs for which approval of the central license authority is required for issuing the license.

The sixth schedule consists of standards that must comply with to import or manufacture Ayurveda, Siddha, Sowa Rigpa, Unani, and Homeopathic for sale, distribution, and stock.

The seventh schedule consists of categories of Ayurveda, Siddha, Sowa Rigpa, Unani, and Homeopathic, for which approval from the central license authority is required for issuing the license.

As per this bill, the Adverse event report needs to be submitted by the person with a license for medical devices and periodic safety report at the prescribed frequency.

If any misbranded or adulterated drug or device is imported, customs have the right to detain it.